April 1, 2022: April Fools' 2022 April Fools' Technology jokes can be prophetic or ominous, wishful thinking or a reflection of real concerns

Even though some companies cancelled April Fools for the third year in a row, not all of us lost our sense of humor yet. A few tech-joke highlights from 2022.
As we are entering the meta world and 3D virtual world gets fused into reality, the April 1st edition of Razer HyperSense suit will be coming handy. It allows its wearer to feel everything their avatar is feeling in-game. That includes physical sensations (thanks to the 1,333,337 tactile sensors) and emotions from love to anger. Anything that happens to the character in the virtual world will happen to the player in real life. And the consciousness can be uploaded to the cloud to last forever in the metaverse. 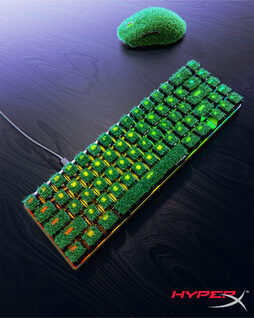 If you're too deep in the doomsurfing and doomscrolling, all you need is to touch some grass.  And you don't even need to get outside - another gaming gear company HyperX is offering the new line of “Touch Grass” keyboards. Tutorials on how to grow green grass on the keyboard were available over 10 years ago, so the grassy keyboard concept - for a green and environment friendly workplace - keeps refining.

Another keyboard innovation comes from a Corsair company Elgato:  the K1 RGB with a finger rest. It packs all the technology you need for gaming into the smallest form factor ever made. You’ll never miss a shot unless you miss hitting a single key. The "F" key. It also comes with volume adjustment and headphone jack on the sides.
​
Other innovative gadgets unveiled on April 1st include a tiny emotion-sensing
OPPOgotcha and Amazon Alexa smart speaker emitting emotion-stimulating scents. London gym chain Gymbox’s in-palm implant, the Handfob™, will allow to check into a gym and automatically measure blood pressure changes, fluctuations in oxygen levels and calorie burn. Sandy Park, home of the Exeter Chiefs, patented ‘heat pad’ technology to warm its stadium with heat generated by the physical efforts of the players themselves. Thankfully, recently announced Dyson's air purifying headphones turned out to be real, not an April joke. 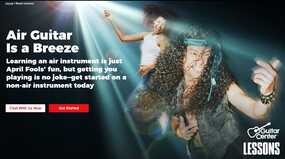 Guitar Center offered easy-breezy lessons for those wishing to learn to play air guitar properly.
Air Guitar is a Breeze. ​Who says you need a six-string to rock out, anyway? Why should instruction be limited to only those who own an instrument? Donny Gruendler, Vice President of Music Education, explained that students who enroll in air guitar tuition will learn all the moves – “the proper stance, the rock face, crowd engagement, swaying vs bouncing and the infamous windmill” – as well as the dangers associated with headbanging. It’s all about having fun while staying safe,” explained Gruendler. “Too much headbanging can lead to neck cramps and headaches, and the performance will suffer.”
Instructors will share wisdom on the “fundamentals of imaginary rock”, with emphasis on the work of the Ramones, the Rolling Stones, AC/DC and Bon Jovi. And those wishing to take air guitar to an advanced level will also learn how to professionally lip sync.
Check past year's jokes from our previous blog posts.

April 1, 2021: Laughter as Medicine: The pandemics is not over, but should we pause the jokes?

April 1, 2019 Technologies we wish existed. Science fiction stories and April fool jokes often describe speculative technology we wish existed in our world.
​
April 1, 2018 Technology Funnies and Futures. Some April Fool's jokes come true, some have the potential to be prophetic or ominous, and some products we really wish existed.

April 1, 2016: Technology, Dreams and Jokes  As Sigmund Freud suggested, jokes often expose unconscious desires. Perhaps the technologies listed below, too, have a grain of our desires wrapped in a smile?  ...

April 1, 2016: IoT marches on: Key Fool's day Announcements  Technology keeps marching ahead. And the future gets smarter with the Internet of Things. Here are a few announcements made on April 1 2016