Research shows that our social circle is at its greatest when we are in early 20s. We start losing friends faster than getting new ones after 25 (Facebook friends don't count!) and the speed of loses only accelerates until retirement. Still, even in retirement one doesn't have endless time for making new friends and acquaintances. It takes roughly 50 hours of hanging-out together to move from mere acquaintance to casual 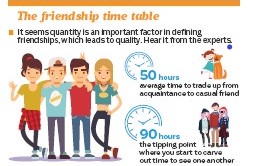 friend, 90 hours to go from that stage to simple “friend” status and more than 200 hours before you can consider someone your close friend. Yet, studies show strong social bonds lead to healthier life, hence it's worthwhile to put time and attention into building quality relationships.
This month "Intuition Robotics" startup officially announced the closing of funding round, to fuel a new type of relationship between humans and machines with “social companion” robots and related technologies. Th goal is to reduce loneliness and isolation in elderly people. In a last year's "Future of Everything" episode, John Markoff says "I used to ask when will there be self driving cars? Not anymore. I ask when will there be an robot that can safely give a shower to an aging human? And nobody has a good answer". Perhaps we already have?

Last week a new AI chip Xcore.ai was announced that will be available from $1. The new chip targets AI-powered voice bots. Robot friends will be here soon — and sooner than you think.


February Press continued to discuss GenXer Ada Calhun's new book "Why We Can't Sleep". It followed a flood of articles on a recent study by the National Bureau of Economic Research claiming peak midlife angst occurs at 47.2 years old. Nothing really new here and the good news is that it is going to get better. According to another study of 2,000 adults commissioned by Riviera Travel, "adults who are 55 years old or older are much more content than their younger counterparts". In her book, Calhun concludes that "the first step to peace in middle age has been learning the game is rigged". When she realized this, she got a new doctor, a new accountant and now "even though things are objectively worse, I feel better about everything."